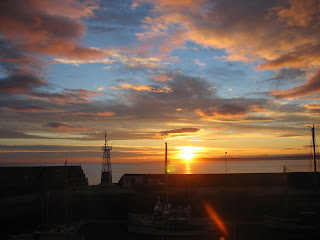 Its a bit much when you've seen more of the world than your own country, so we decided to head off to Scotland. We were to stay in Lossiemouth a small town on the edge of the Moray Firth (sort of close to Inverness). Most people on hearing this asked about the RAF base there, but Lossie was more than just an air base, it was the perfect base for sight seeing round Scotland.
Getting there
As we live right down in the South of England and Lossie is right up in the North and we had decided to drive, we decided a stop on the way might be a good idea. So our first stop in Scotland was Edinbugh.
We knew that the parking in Edinbugh is near impossible so we decide to stay in a B+B on the outskirts and get the bus in. We stayed at the Eildon B+B in Musselburgh, which was really nice. Eve, the lady of the house was full of information and more than happy to pass it on.
We stayed for 2 nights so spent one day walking round the sights of Edinburgh. Even in the light rain it was still a very picturesque city. My favourite stop was at the Museum of Scotland, which gave us a really good background for the rest of the trip, as well as being able to see the Lewis Chessmen.
We also stopped at the Queens Gallery, where we saw a display of Canaletto in Venice, but the display changes regularly. Also in Mussleburgh, we had the best ice cream of the trip - S.luca. Eve said it was the best ice cream in Scotland and I'm inclined to believe her.
The drive from Edinburgh to Lossie took almost a day thought we did stop in Aberdeen for a look round their art gallery.
Our apartment in Lossie was lovely. It was light and spacious with views out to sea. Perfect. It might have been windy that first night, but except for one day we had beautiful weather. I was ill the first couple of days so we took it easy with walks on the beach and chilling out. Lossie is the perfect place to do this, and I can imagine this would be a wonderful place to visit in the summer. We even saw dolphins from our bedroom on two separate occasions.
Being in Scotland I wanted to see some proper standing stones. So on my first day of feeling better we went to see Sueno's Stone in Forres. It's a huge (20foot) Pictish stone. Very impressive. Although we tried to find other stones, most weren't sign posted or the signs never lead anywhere. Which was a shame. We then went to Elgin Cathedral which is another impressive ruin. There are quite alot of these throughout Scotland.
It's also close to Tescos so we went and bought something for tea before going back home.


We couldn't be so close to Loch Ness with out going to have a look. I couldn't believe how big it is. The map just doesn't do it justices. We drove down the West side stopping at Urquhart Castle. Once again the weather was amazing. We carried on down this side to stop at Fort Augustus. Here there are many locks to take boats all the way from there to the West coast. We could have driven up the East side to get back but as most of it is single track road we decided aginst it. The veiws were stunning as the trees start to get their autumn colour.
Reindeer 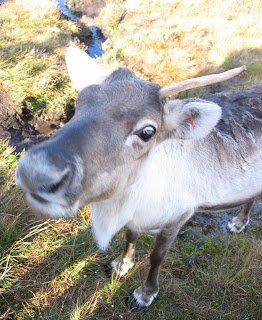 The weather on Wednesday was rubbish so we stayed home. But Thursday dawned bright and beautiful, which was lucky as it was our last chance to get in to the Cairngorms and the Cairngorm Reindeer Centre. The drive took about 2hrs but we were still in time for the one and only guided excursion of the day.
Leaving the Centre at 11:00 we walked up a small hill to find the reindeer who wander free on the top. They were lovely and very friendly (we did have food for them after all) and it was my favourate thing of the whole trip. We spent ages up there and I took about 60 photos - lucky it's a digital camera. To find out more visit their website.  After lunch by Loch Morlick we went to the Highland Wildlife park, just up the road. It was good, but I liked the reindeer best.
Heading home
All too soon it was time to come home. But once again we had decided a stop on the way might be a good idea. This time we decided to stop in The Lake District. We drove down the West side of Scotland, which was very different in landscape from where we had been staying. Quite amazing. Then back into England.
It seemed very flat after Scotland. That is until we came into the Lakes just as the sun was setting and suddenly there were hills again. We were staying at another B+B, and thought it was comfortable, I was too spoilt by the rest of our accomadation to like it very much.

As we only had a day here, we decided against climbing to the top of one of the impressive hills, but rather to drive round and see some sights. We started with the Castlerigg Stone Circle. I'd hoped to see more of these in Scotland, but this was still excellent. We then drove down Lake Windermere before disapearing into some tiny lanes. We found somewhere to stop and went to for a walk as the light begain to fade. Its a very beautiful part of the country and I think we will have to go back to explore properly.
The next day we were up early to make the drive back to realitly.