Cornwall and an English Summer 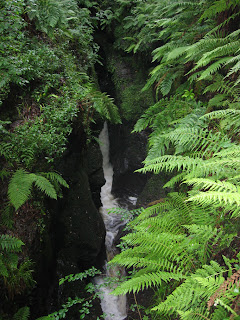 After the success of we decided to try for a slightly warmer holiday.  So 7 days in in June were booked.  Little did we know that the weather had decided against warm that week.  Being we should have guessed.
It was already raining when we left in our hired car.  Not quite the drive we had going to Lossiemouth, but it would still take most of the day.  Especially as we decided to stop at Lydford Gorge for lunch.  We also decided to walk the 3 miles round the gorge which was beautiful and smelt of wild garlic.  We took it slow and enjoyed the views of waterfalls and were surprised at how many people seemed to march passed without looking.
This isn’t a walk for the faint hearted; in places we were going over slippery rocks and close to the river but it was worth it for the view of the Devils Cauldron at the end of it.  Here the water has cut away the stone and polished it as it swirls and splashes through, to stand above it is amazing.
We were staying in ‘The Old Dairy’, a self catering cottage on a farm along some tiny lanes near Turuo, where we arrive around .  That evening we watched the sun set over the sea while eating fish and chips.  A good start to the holiday. 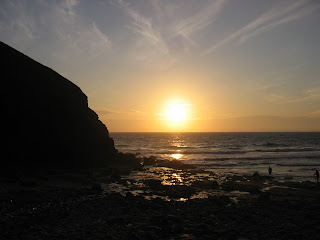 The next day we visited St Ives.  I’d wanted to come here to visit the Tate Gallery, but the town itself was beautiful.  Compared with the London Tate, this one was quite small, but it was packed with art work and we had a good wander.  The sun had come out by now so we carried on to Barbara Hepworth’s house and garden.  I really enjoyed the museum, but then I am a fan of her work.
We thought St Ives was a lovely town, but signage isn’t their strong point.  We found the Tate, Barbara’s house and the car park more through luck and a willingness to keep walking till we find the thing we are looking for, than through any useful signage.

On Sunday we visited the Eden Project.  It’s not how I imagined it would be, but I still enjoyed it.  We walked round the outside then went into the huge biomes, where the rain sounded like thunder on the roof.
I though all the information about renewable energy and recycling were inspiring, but I wonder how much of that inspiration makes it home.
On Monday we woke to flood warnings.  Heavy rain and winds made it hard to decide where to go, but in the end we drove to Newquey.  We stood on the cliffs and watched the sea crash on the beach, no one surfing today.  We had a walk round the shops, but were soon on our way back to the Dairy to hide from the rain.
The next day dawned dry if not sunny and we decided to find the of Heligan, except there not really lost any more.  This was a real jungle garden full of bamboo and tree ferns and gunnera.  They had other gardens too, which were more organised and we spent all of the morning wandering.  Leaving late after lunch we stopped at on the way back.  Here we walked round their woodland garden, enjoying it nearly by ourselves before stopping for a cream tea.  I’d not had one before and it was delicious!  They also had swallows in their barn and we spent ages watching as the young who must have flown the nest quite recently came in and sat on the beams and chatted to us.
Our next excision was to Lands End.  I’m not sure what I was expecting really, but it certainly wasn’t a huge car park and a mass of shops.  Once you got passed the shops and amusements it was more like it should be, rocky and barren and cold.  But it looked like a lot of other bits of English coast so it was hard to believe that there was anything special about this bit.


We soon went back to the car to hide from the wind, and drove round to St Michael’s Mount.
You can get to the Mount by a causeway, but it’s tidal, so we took a boat.  From the quay you walk up the hill, in places quite steep, to the castle at the top.  It’s surrounded on 3 sites by gardens on the steep sides and we walked though them.  Then for a moment the sun shone and the sea turned a brilliant blue and the gardens emerald green and I saw a glimpse of the that everyone talks about.  Then the clouds came again and we went and hid from the rain in the chapel.
Our last day was spent at Trevarno, another garden, and then the beach.
Tervarno was lovely with a big lawn, woodland and lake and lots of birds, including peacocks and a golden pheasant.  I would swear that they posed for our photos, or maybe it was for our sandwiches?
After lunch we went to Godrey where we watched small black rubber seals bobbing in the waves by the cliffs.  Rather them than me.
And then the week was over and we had to make our way back home.
We stopped at Cheddar for lunch, but didn’t have time to have a proper look about.  Something for another trip maybe…