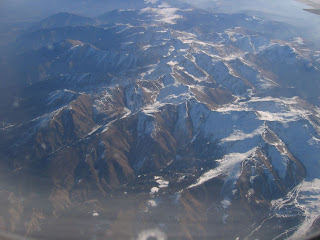 With two days to spare till a long weekend off work, we still hadn't decided what to do. England was depressing, cold, damp and cloudy and we needed some sunshine. A chance comment of 'Somewhere warm please' and 20 minutes on LastMinute.com and we were booked for Barcelona!
With only 2 days between booking our ‘city break’ and leaving for the airport I didn’t get to do any of the things I’d normally do before a trip away, like buy a map or book about the City, or find the perfect note pad to be my diary.


But Heathrow seemed more than happy for satisfy our demands and so during our short flight we were happily occupied with a huge map and a Spanish phrase book.
All I knew about was it was in .  A quick look at google before we left confirmed it was on the coast and that was it. 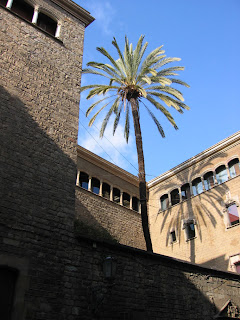 Leaving in cloud and dawn we arrived in to sunshine and palm trees.  Just what we needed.
We got confused at the airport as we couldn’t work out how to get to the metro to get into the city, but finally realized that they were working on it and we had to get a bus to the station.
Again working out were to get off was confusing, but by more luck then judgment we managed to get off at the huge central station, and then find out hotel – the Expo Hotel, which was right next to it.
Even thought they were doing building work on the Hotel too, it was still very nice.  We were never disturbed by any sort of building noise and our room was lovely.  Stone flooring and a balcony.  We let the door open over night as the room was so hot.  (it did have air con, but it was noisy and it gives me headaches.)
When we arrived it was about lunch time so we left our bags and went into the city.  We got the metro and found that we could buy a ticket for 4 days that covered everywhere.  It sounded like a great deal to us.  They were perfect.  It meant we didn’t have to worry about buying a ticket every time, and we could hop on and off as and when we wanted. 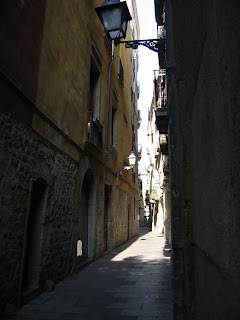 Once we’d got toasted sandwiches for lunch we decided to have a walk round.  We found the old town first, which was full of little ally-ways which wound round the houses which towered overhead making them dark and slightly mysterious.  They were also full of tiny shops full of everything you can think of.  And there were many churches.
We came back often as it had so much charm, and I think it was maybe my favourite part of .
Outside, I think it was the Cathedral, was a wide plaza where we found somewhere to sit and watch the people go by and enjoy the lovely sunshine.  We still needed our big coats, but no need for gloves like there would have been at home.  In fact I wish I’d bought my sun glasses.  I don’t know how long we sat there before heading back to the hotel where we ate dinner. 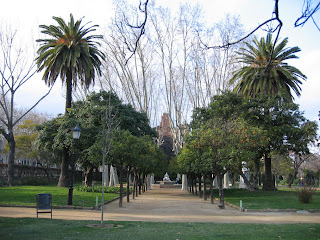 On the next day we meant to go by cable car to the castle, but they were closed for maintenance so we wondered round the Parc de Montjuic, which suited us just fine.  Again there were plenty of people to watch and lovely sunshine to sit in.  It was a lovely peaceful morning.  The views from up here were stunning, while not being able to hear any of the city noise.    We walked round for a bit and if we’d gone farther we would have found the Olympic stadium, but it was nearly lunch time and we decided to come down.
As we were in a city by the sea, we decide to go to the beach.  Considering it was still quite cold, even if the sun was shining, the beach was packed.  I’ve never seen people sun bathing in coats and scarves before.  Again we walked and then sat and watched people.  There was an amazing variety of ages out and about, and many dogs.
We went out into town this evening for dinner and went to The Attic, which had been recommended.  The food was pretty good and when we finally left the city was still heaving!
On Sunday we visited the MACBA or Museu d’Art Contemorani.  It had 3 floors so we started at the top and worked our way down.  The art was a bit weird really.  Lots of videos of strange stuff.  More explanations in English might have helped us enjoy it more. 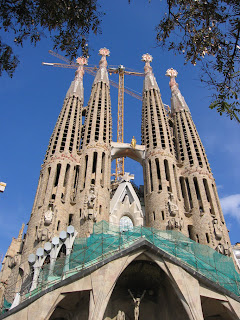 We then decided to visit the Sagrada Familia, probably ’s most well known cathedral.  It’s still unfinished with a possible completion date of 2090!!
We decided not to join the crowds queuing to get inside and instead sat in the sun in the park opposite to enjoy its splendor.  It’s really huge with so much detail you can understand why it’s taking so long.
On the way back we stopped at the Arc de Triomf and watched the parakeets – green and very noisy.
As we walked down to the Parc De La Ciutadella we found trees with oranges on – Amazing.
Walking through the old town to the metro we found the first church we had encountered on Friday, Santa Maria del Mar, was now open, so we slipped inside to have a look.  It was huge and so dark, except for the brightly lit windows and the orange glow of candles in glass holders, down each side.  Beautiful and how a church really should be.
Again the city was very busy when we went out for dinner.
On Monday, with not much time until our plane and with the weather finally breaking, we walked once more round the city in drizzle, before catching the train back to the airport.
It’s a beautiful city, and I can’t believe how hot it must get in the summer although we read a lot about how most people leave the city in the summer to escape the heat.  A weekend seemed just right.  If we had stayed for longer, I think we would have rented a car and left the city on day trips.